NOTICE: Publishing and editing are currently disabled but will be back soon, thank you for your patience.
close banner

Files
The reurbanization case of Villa 20, City of Buenos Aires
Academic article on the Participatory process in Villa 20.
Academic presentation for Harvard University.

Evaluation Report Documents
Final Report on the Evaluation of the Villa 20 Case.pdf

Participatory Slum Upgrading Process in the City of Buenos Aires: The "Villa 20" Case

Files
The reurbanization case of Villa 20, City of Buenos Aires
Academic article on the Participatory process in Villa 20.
Academic presentation for Harvard University.

Evaluation Report Documents
Final Report on the Evaluation of the Villa 20 Case.pdf

This entry was originally added in English. View this entry in its original language. click for more info

The Housing Institute of Buenos Aires City Government has designed and implemented a large-scale participatory slum upgrading process that is integrated, sustainable and inclusive through broad stakeholder participation in all phases of the intervention.

While the total population growth of the City of Buenos Aires has not suffered important variations during the last sixty years, the population in slums has doubled during the same period.[1] Currently, in the city, there are 36 slums and informal settlements.[2] This means more than 250,000 people living in substandard conditions (insufficient living space, poor access to water, gas, electricity, and sanitation, and insecurity of tenancy).

Understanding that the conditions in which people are housed — as well as their access to schools, transport, jobs and nature — are critical factors that affect the quality of life, the government has become more active in large-scale slum upgrading and integrating slum communities into the wider city. Since 2015, it has been implementing this process with an innovative community participatory approach in three slums: Villa 20, Villa Fraga and, Villa Rodrigo Bueno. The Villa 20 has been chosen in this case because of its scale (it is one of the largest slums in the city of Buenos Aires).

Villa 20 is a slum located in Lugano neighborhood. There are 9,200 families living in 4500 houses which total 28,000 people. The lack of infrastructure in this slum is striking, including poor access to an adequate water source, lack of access to improved sanitation facilities, as well as lack of a sufficient living area and security of tenure. All these conditions have severe effects on the inhabitants of the neighborhood.

Over the last twenty years, slum upgrading has increasingly been regarded as the most effective method for mitigating the problems faced by slum dwellers (UN-HABITAT, 2016). There has been an increasing realization that urgent solutions are required. There are many examples in the global experience in slum upgrading going back to the 1960s in the World Bank-supported Kampung Improvement Program in Jakarta, Indonesia, or the Bustee Improvement Program in Calcutta in the 1970s. Also, in Latin America, there are multiple such programs financed by the Inter-American Development Bank from 1980 to 2016 in Brazil and Mexico.

Unlike these experiences, the particularity of this case is that it starts from the premise that the participatory community will be part of the design and implementation of the process. In practical terms, this means that each upgrading project is designed to reflect each slum's own process, with its particular social composition, and its own community governance structures, led by the neighbors involved in active participation.

Many project designers would agree that “process matters”, but there are few examples where process has been given such priority in the design and implementation, and at such a scale.

The Housing Institute of Buenos Aires (IVC) is the city government body responsible for providing citizens with access to adequate housing and to an integrated neighborhood. This Institute is actually working in the upgrading of 8 slums of the city (with impact on more than 50% of the City slum dwellers) and is doing it with an innovative bottom-up approach.

Know how participants were recruited? Help us complete this section!

The participatory slum upgrading process (PSUP) launched by the Housing Institute of Buenos Aires, presents an innovative approach in planning and implementation at the urban and community level. This process is based on the three pillars of inclusion and integration that are the foundations of the Institute's approach to neighborhood improvement: 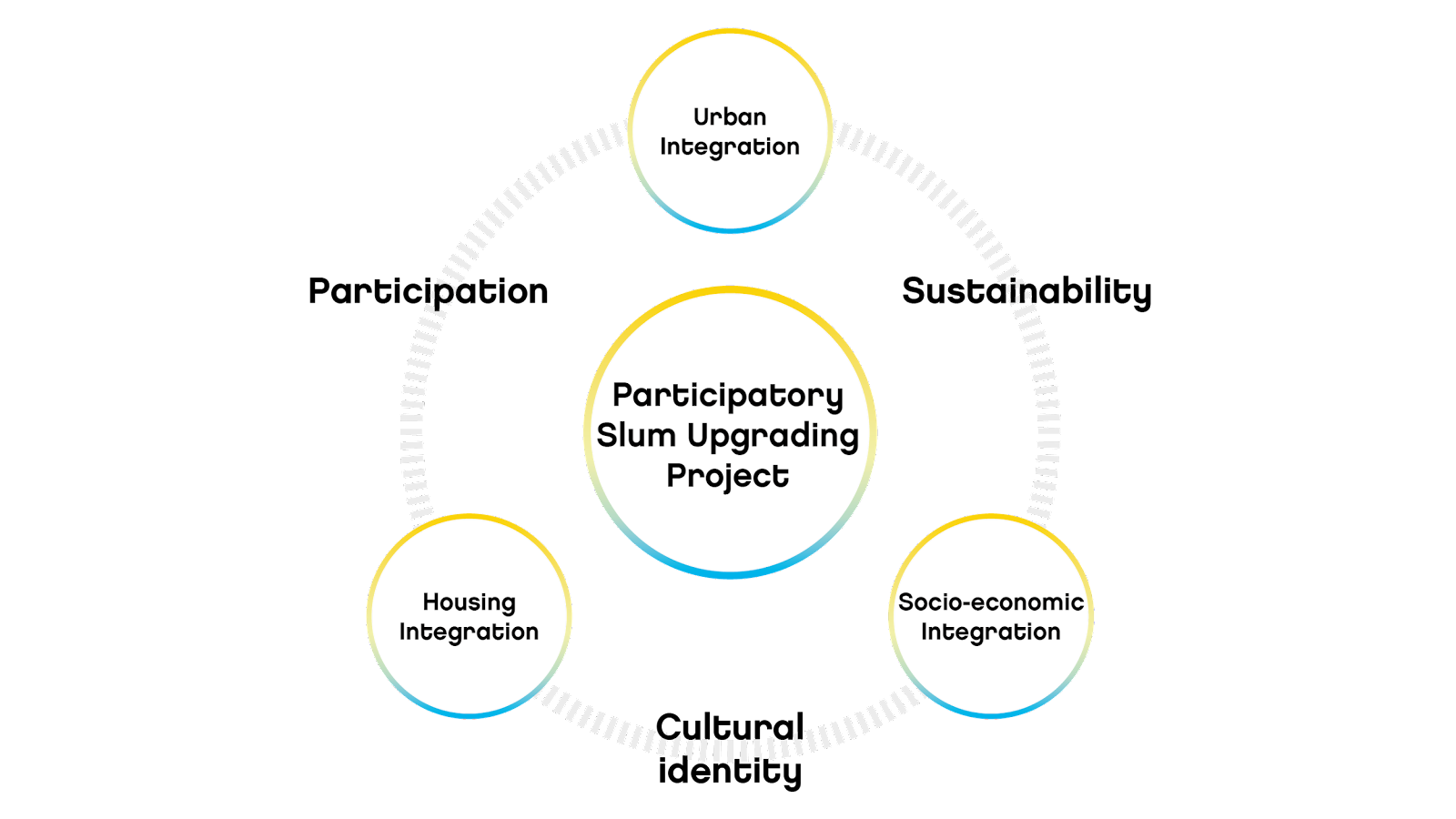 Past experiences show that projects which do not contemplate these three areas of action have failed. In the 70's, housing complexes were built to resolve housing, but did not connect the neighborhood with the city. They caused conditions of inequality and marginality. In this sense, the design and implementation of the integral project of re-urbanization brings sustainability to the slum upgrading policy.

At the same time, these pillars are connected by the participatory intervention and a cultural cross-cutting intervention recognizing that each neighborhood has a particular identity and a sense of place; these projects enhance the cultural diversity and identity.

What Went On: Process, Interaction, and Participation

On December 2015, after a National Election in Argentina, there was political alignment between the national and city governments, which gave opportunity to the City to undertake the objective of upgrading slums.

In this context, the Housing Institute of the City of Buenos Aires started this process by approaching the neighborhood's leaders to establish a dialogue, define intervention objectives, and involve the relevant actors in the decision-making process. Following a situation analysis, representatives of the slum identified the major problems to be addressed. First was a lack of historical response to the poor infrastructure of the neighborhood in general and a deficit in the housing situation. While the City Government had worked in the past on partial interventions in the neighborhood, most of them had not been completed. This brought a strong sense of disbelief and lack of confidence from the neighborhoods regarding the proposed process from the Government. They also identified as a problem the lack of a participatory definition of the adjudication criteria of new housing. Finally, they highlighted as a problem the poor quality of rented accommodation, with years of minimal maintenance by the illegal landowners.

Figure 2. A Participatory Community Management Board meeting in Villa 20.

From the beginning, this Board worked in the generation of micro-consensus with each of the actors (in weekly meetings) towards the definition of a common objective: the re-urbanization of the neighborhood. These micro-consensuses allowed unification of the efforts of all the neighbourhood actors around the goal of achieving re-urbanization and socio-urban integration. The final product of this first stage of the process was the preparation, approval, and regulation of the re-urbanization bill (Law 5,705) that legitimized and formalized the process and laid the foundation for the social and urban integration project. The law establishes the scope of the PSUP, its objectives and the three pillars of intervention: housing, urban, and socio-economic integration.

The urbanization intervention strategy involves working in various participatory instruments that allow the building of consensus at four levels:

Each of the thirty blocks of the Villa 20 where the government is working is represented by one of the Management Board that organizes two meetings per week (in addition, every 15 days, there is a roundtable meeting of the entire neighborhood). In those roundtables, the plans presented by the IVC are shaped, and the neighbours that will be relocated are informed of the moving procedure, and which loans they will have to assume to pay for the new housing (long-term loans with accessible quotas according to the economic possibility of each family). The community also decides, through their vote, which houses will be demolished to make way for the area’s new road. Because their futures are directly affected by the decisions, and because they can help in the upgrading process, it is necessary that they are fully informed and actively involved.

To define the block's projects among the available alternatives, there is a formal and secret voting, in which each family can cast a vote. By this means, the urban project for the block is validated and legitimized.

Figure 3 presents an example of one block’s voted proposal for the opening of public roads and the consolidation of the opening of new public spaces. The proposal shows at the left the actual plan of the block. The houses marked in red are the ones that will have to be demolished to give way to the new paved street. At the right, the agreed plan also shows the opening of public spaces between houses that will allow for better lighting and circulation of air. The complexity of the intervention implies that the definition and decision-making go through multiples instances of negotiation and conflict between various actors and in that case the Management Board should be the privileged space to receive them, work them through, and reach agreements. 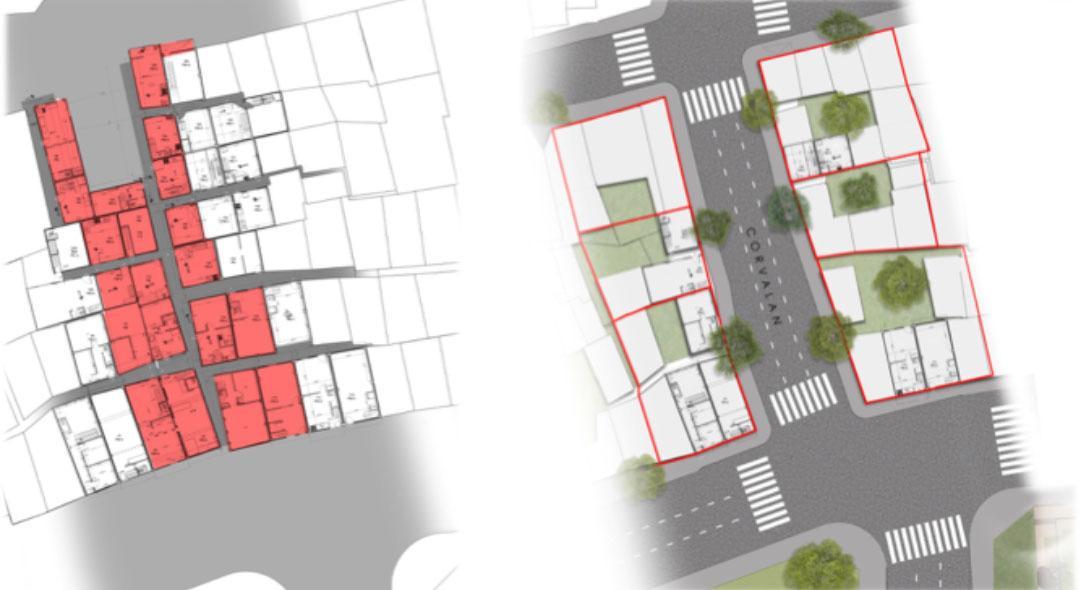 Figure 3. A plan of a block before and after the Board agreed on the opening and consolidation of public roads and spaces.

Figure 4 is the plan of the slum before and after the PSUP intervention. The left plan shows the new configuration of the blocks, where the streets will be opened and public spaces built. The bottom right area is where the 1,667 houses were built.

Figure 4. A plan of a slum before and after the Board agreed on the opening and consolidation of public roads and spaces.

﻿First results of the PSUP show that, when mechanisms of participation are well designed, the participatory process can be massive, deep and efficient.

On the quality of the community participation

A preliminary report, from the Observatory of Latina America University of New School, presented the results of the evaluation of the Participatory Slum Upgrading Process (PSUP) of Villa 20. The report includes an evaluation of the participatory dimension of the PSUP which aims to analyze whether the institutional structure, the work teams, instruments and devices provided by the IVC, as well as the proposed methods and activities, enable or not the active participation of neighbors in the urban planning process. This capacity is understood as the possibility of people and groups to have an influence on the conditions that affect their lives. The report evaluated satisfaction with the participatory process, the legitimacy and satisfaction of the results: 84% stated that the information provided during the workshops was clear, 78% considered that they could express their opinions during the meetings and 78% of neighbors said they were satisfied with the results.

Some policy designers believe participation creates risks, makes implementation slower or generates expectations that are difficult to meet. But this Villa 20 Case experience shows that, in fact, participation creates an opportunity for success, allowing citizens to better plan their neighbourhoods and live better lives in their cities.

A few lessons learned from this project on the importance of this participatory approach.