Time Limited or Repeated?
A single, defined period of time

Face-to-Face, Online, or Both
Online

Types of Change
Changes in people’s knowledge, attitudes, and behavior
Changes in civic capacities
Changes in how institutions operate

mVoting: Online Participation at the Municipal Level in Seoul

Time Limited or Repeated?
A single, defined period of time

Face-to-Face, Online, or Both
Online

Types of Change
Changes in people’s knowledge, attitudes, and behavior
Changes in civic capacities
Changes in how institutions operate

An application called "mVoting" was used in Seoul, South Korea, to give citizens the opportunity to vote on local policy, thus engaging them in the democratic process and sparking open dialogue with their representatives.

In 2013, the city of Seoul in South Korea created an app called “mVoting” which allowed citizens to submit and vote on local policy proposals, thereby enforcing a system where “citizens are mayors”.[1] MVoting aims to advance new knowledge in e-governance implementation and e-government initiatives that are becoming increasingly important considering the fast-paced nature of today’s technological world. It was expected that the initial use of mVoting in the technologically-advanced South Korea would spark an interest for open dialogues with citizens, not only in Seoul, but across the world.

Up until 1993 when South Korea’s first democratically elected president, Kim Young-Sam, came to power, the nation was run by a number of military dictatorships which brought periods of “extreme media censorship and government-sponsored murder of political dissenters”.[1] Today, South Korea is “moving faster than any other country” [2] and its democracy, particularly from a technological standpoint, seems to be stronger than ever. Rutgers University’s E-Governance Institute has ranked Seoul the best in the world for using technology to provide and communicate government services and involve citizens in decision-making 14 years in a row.[3] The encouragement behind implementing platforms like mVoting were backed by the country’s political rigor combined with the world’s fastest internet connection and highest rate of smartphone ownership. For a country where there are more than 37 million smartphone users, it seemed to be the perfect recipe for citizen engagement and democratic governance through deliberative processes. The mVoting app was forwarded as a way to reduce the cost of citizen participation and draw citizens into the Seoul Metropolitan Government’s Policy Formation Process by expanding and providing more convenient channels.[2] There was also the general desire to push for more open dialogues with citizens and to learn how to best prioritise and listen to the needs of citizens. Connecting through a mobile platform that most Seoul city citizens would find quick and convenient to use would help ensure that people feel connected with the city administration even if they did not assert an offline presence.

Discussions on establishing mVoting mainly revolved around the fact that it would reduce time and economic costs that are incurred when holding meetings, ranging from various small committee, board member and department meetings to large-scale policy meetings. Through these deliberative processes that aren’t so formal, citizens would be encouraged to participate in deciding on important issues that may determine the future of their city or even their country on a wider scale. The hope would be to be able to attract a wider range of people.

The cost of organising this initiative or application has not been explicitly identified, however, it is noted that it is inexpensive to implement,[1] especially if we were to benchmark it against other forms of processes used in the world to encourage democratic engagement and governance. An example is the cost of conducting surveys offline and at town hall meetings to assess the sentiments of citizens. Representatives of the app have stated that those “traditional” ways of listening to residents’ comments are “too costly, require too much time and too many human resources”.[2] The app is funded by the Seoul Metropolitan Government and the use of mobile devices that citizens will most likely already own is depicted to significantly alleviate the cost of receiving feedback on many important issues. This incoming feedback would then be managed and screened by public officers of the city government.

The mVoting app is accessible to anyone who is able to confirm their identity with a Korean phone number or social media account. Phone number authentication is used to avoid duplicate votes which would prevent disproportionate participation. Although it does exclude those who do not own mobile phones or specifically an Android or iPhone, there is also the option for citizens to vote online on their computers. PC mVoting was developed for this specific purpose. The closed intermediate voting results means that voting results cannot be seen before participating. This is to prevent biased influence by particular groups based on intermediate results. The app also has a social-network-service (SNS) sharing function which can be freely activated and inactivated. This is to avoid conflict between groups on votes for sensitive matters. These settings are made available to encourage strong participation amongst all types of groups and protect private and personal information of citizens.

What Went On: Process, Interaction, and Participation

The mVoting forum provides a space for citizens to talk about city problems and provide suggestions or solutions in a space where policymakers can easily access feedback. The forum is made efficient by enabling users to browse through local policy proposals based on geographical relevance or popularity. Citizens are therefore able to express their opinions on issues or services that they are interested in or have most contact with. 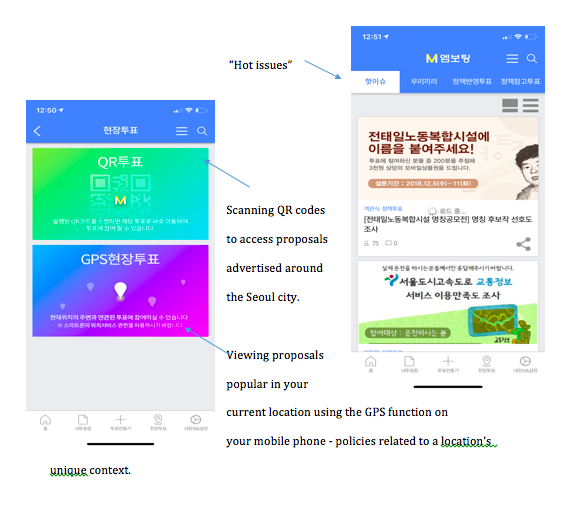 Some examples of the types of proposals that come up on the mVoting app include: voting on designating of non-smoking areas in the Han River Park, voting on the restriction of driving vehicles when the level of air pollution rises, asking citizens about the problems of public buses, and asking citizens for their opinion on potential policies that will enable those over the age of 65 to ride public transportation for free.

However, voters on the app are not included in ‘real’ elections. The app is predominantly for residents to give feedback to the Seoul Metropolitan Government on various types of matters. In Seoul, there are many types of government services made available to citizens online such as government websites that allow citizens to authenticate their identities and look up their own vital records (http://efamily.scourt.go.kr/common/info.do). Foreigners are also able to apply for visas and make immigration appointments online. It was clear that Seoul had a suitable environment to test out e-government initiatives on smartphone devices. 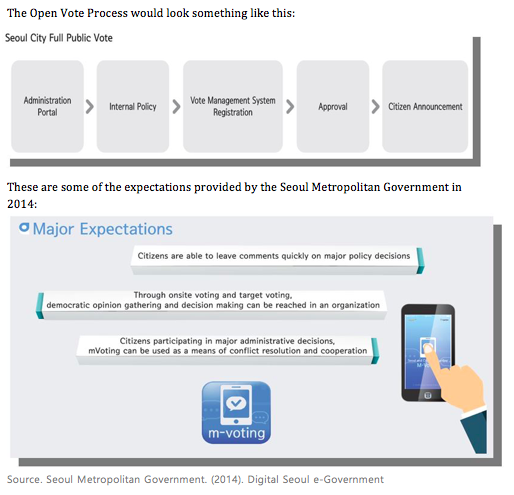 The statistics provided on the ‘Seoul Solution’ website reveals that at least 181 proposals have turned into actual Seoul City policies. The app has been downloaded at least 100,000 times on Google Play, being downloaded approximately 280,000 times on App Stores in total. As of June 2016, more than 1.1 million users had voted in the App. At least 4,400 proposals and voting agendas have been posted – 88% coming from citizens and 12% coming from officials. Despite it not being an official voting process, it is seen to provide substantial advice, particularly to the bureaucracy.[2] MVoting is believed to be a citizen-driven communication platform and is actively being used in policy formation and implementation processes. It is also estimated to have significantly reduced temporal, economic and electronic costs.[2]

mVoting demonstrates that increasing opportunities for citizens to participate through both offline and online forums can create a better environment for democratic innovations such as inclusiveness, popular control and transparency to emerge. In Smith’s (2009) analysis of democratic innovations, we see this idea further explored.[4] He states that participatory democracy will decrease the tendency of democracy to be manipulated by elites, which nations like South Korea indefinitely struggle with. Fostering greater individual and collective participation thus allows for a community’s shared values to be reflected in important decisions. The app also filters important issues enabling the government to prioritise effectively and listen to the most pressing concerns of citizens. This will then cyclically affect the public perception of the democratic government.

Observing the effect that mVoting has had in Seoul leads to the question of whether there are certain conditions necessary for the emergence and success of participatory institutions or programs. Avritzer (2009) observes participatory institutions in Brazil which have become well-known worldwide due to their capacity to attract the participation of poor citizens and to redistribute public goods accordingly.[5] One of the main benefits of mVoting in Seoul is definitely the fact that it is a good tool for implementing the philosophy of citizens and encouraging civil collaboration in a high-tech society. Not only will it be inclusive of a larger demographic but also incentivise the idea of participation and democracy through linking it with fast-paced, easy-to-access technology.

One of the main issues with mVoting is arguably the issue of proposals and submissions not being included in ‘real’ elections and thus not having any ‘real’ impact or effect on democratic institutions. Through analysis of statistical evidence, it is evident that submissions and input on the application have been of great assistance in providing substantial advice to the bureaucracy. In Canada, the use of deliberative forums in decision-making at both the local and provincial level has often been ineffective in terms of linking outcomes to tangible action.[6] What we are able to see through relating the findings of this case to other cases is that the effectiveness of participatory or deliberative platforms in democratic institutions is highly dependent on those who maintain authority or more specifically, those who control the regimes. If councils and governments are active and take responsibility in transferring citizen response into tangible action, the effectiveness of eParticipation platforms will undoubtedly be two-fold. As stated by Holzer (2017), “the government needs to be willing to plan this and also open themselves up to a sudden flood of requests from citizens”.[2] Many have stressed the centrality of political parties’ initiative in the “implementation and expansion” of participatory institutions.[5, p. 164]

Many democratic participatory institutions are faced with the issue of ensuring that they do not undermine or interfere with the power of existing political representation.[5, p. 9] What mVoting does is not encroach upon the duties of political parties or political representatives but merely suggest and give citizens power in an indirect way. Max Weber and Carl Schmitt pose the issue that participation does not necessarily lead to rational and desirable results.[5, p. 4] In this sense, potentially having a government to filter through these proposals and votes made on the application is the most effective way to address the issue of citizen proposals directly affecting the law. But perhaps this undermines or contradicts the purpose of participatory platforms. This is a dilemma that politicians and scholars are still faced with today.

If mVoting in Seoul continues to produce good results, it is likely that the initiative could spread participatory democracy to other municipalities in South Korea. This possibility in itself means that electronic voting or eParticipation platforms have great potential in terms of its transferability to other states in the world. Particularly considering the low-costs and low-difficulty in implementing an application like mVoting, this does not seem like too low of a possibility.

Michels, A. (2011) Innovations in democratic governance: How does citizen participation contribute to a better democracy? International Review of Administrative Sciences, 77(2), p. 275-293.